Places to Visit in the Southwest: The Arizona Wave 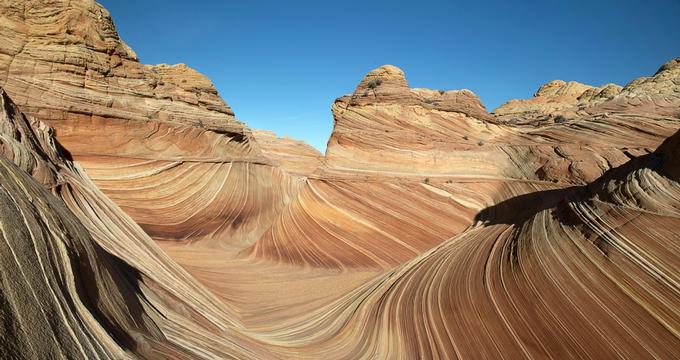 The Wave is a unique natural phenomenon that serves up a truly breathtaking landscape for those dedicated enough to make the trip. The sandstone rock formation can be found in Arizona near its northern border with Utah.

The landmark is administered by the Bureau of Land Management, which, due to the fragile nature of the formation, limits visitation to only 20 people per day. The tickets are given out by lottery to ten lucky hikers from the Kanab Visitor Center in Utah. The other ten must be pre-booked four months in advance online. Once you have your ticket, only then are you provided with information on how to make the long and quite arduous hike to the formation.

With its soft undulating patterns, the rock almost appears to be a natural optical illusion. The striations in the sandstone are largely caused by wind erosion, whereas the two major troughs that comprise the rock formation would have been formed through water erosion. Dating back to the Jurassic Age, the Wave has provided historical insight into geology and the world we live in while offering an interesting feast for the visual senses.

It’s possible that the Wave can attribute its surging popularity with tourists, backpackers, and the photography set to the fact an image of the formation was included as wallpaper on the Windows 7 operating system. It could be this alone that introduced the amazing natural phenomenon to a worldwide audience, who clearly saw something they liked.

It’s now almost impossible to call yourself a landscape photographer without having visited and snapped at least a couple of good shots of the Wave. Whether playing around with the curving, trippy, kaleidoscopic patterns or taking a shot down in the troughs of the perfectly still, azure blue water floating atop the contrasting, livid orange sandstone, there is always a new perfect shot to chase. The lighting is also an incredibly important factor, and at sunset and sunrise a talented snapper can capture some extremely stark and dramatic images; at midday, though, with the sun right above you, the sandstone comes alive with color and the lack of shadow really brings out the curves of the Wave. It’s probably best to get there with enough time to capture both if you want to leave with that perfect shot.

There are four trailheads that access Paria Canyon and the Wave. However, as mentioned, overcrowding is discouraged and so there is no official signage and there are no formal trails. You will receive guidance on the various approaches when you get your golden (or orange sandstone) ticket. The White House trailhead is the most commonly used and probably the safest and easiest to follow for inexperienced hikers. The Buckskin Gulch and Wire Pass trailheads offer more experienced hikers access to Buckskin Gulch, the main tributary of Paria Canyon, for some bonus scenery soaking. The Lee’s Ferry trailhead is located at Paria Canyon’s lower end and represents the normal exit points for hikers travelling the entire length.

Things to Do: The Arizona-Sonora Desert Museum