Things to Do in Tucson, Arizona: Pima Air & Space Museum 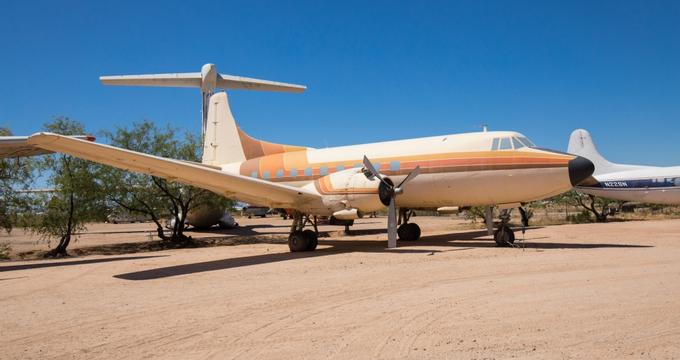 The Pima Air and Space museum in Arizona showcases over 300 airplanes throughout its 80-acre campus, including a popular 2,600 acre “boneyard” of out of service commercial and military aircraft. Five indoor exhibits include two hangers dedicated solely to World War II aircraft.

The Main Hangar exhibits offer an overview of aviation history. A Sea Planes and Amphibians exhibit showcases aircraft from the 1920’s through the present day designed to take off and land in water. An Aircraft Carries exhibit centers around the museum’s Grumman F-14 Tomcat, and shows the equipment and tools used on the deck of an aircraft carrier. Aerial Reconnaissance shows cameras and equipments used in World War I reconnaissance missions. The Vietnam Air War exhibit tells a story of air combat in North Vietnam through oral histories, videos and artifacts. The Women in Flight gallery honors women’s contributions to aviation from the 1700’s to the present day. Photographs and artifacts include a large collection of women’s commercial and military uniforms. A special exhibit is dedicated to the history of Arizona Aviation. The Space Gallery Exhibits explore the United States’ efforts in space exploration, via experimental X Planes of the US Air Force, NASA and it’s precursor, NACA.

The Space Race exhibit teachers the history of the race to land on the moon. Follow the Water tells the story of searching for water on mars. The Arizona Aviation Hall of Fame is located in the Space Gallery and honors Arizonans who have made significant contributions to the aviation and aerospace industries. Hangar 3 exhibits are dedicated to World War II and the contributions of African Americans, the 376th and 446th bomber groups and the Martin B-26 Marauder. Hangar 4 exhibits explore the World War II history of the 315th bomb wing and 330th bomber group and those who flew the B-29 Superfortress. Outdoor exhibits include the Firestone Galleries’ "The Bone Yard Project: Return Trip.” This exhibit includes several planes decorated by renowned contemporary artists with mixed media and paint. “Beauty of Flight” is a large sculpture which intertwines three Northrop-McDonnell Douglas YF-23 aircraft. “The Beacon” is a preserved flight beacon originally installed at the Douglas, Arizona airport. Lighted beacons were used pre-1929 to guide aircraft across the United States in the years before radio navigation was possible.

History: The idea for the Air and Space museum began in 1966 when, at the 25th anniversary celebration of the US Air Force, commanders realized that the history of aviation was disappearing as old aircraft were demolished. Through their own initiative, they began placing out of service aircraft along the fence line of the base so the public could view them. The initiative was quite popular and a Foundation was started to raise funds to purchase land for a public museum. The museum’s first major acquisition of a plane from outside of Tucson was in 1969 with the purchase of a Consolidated B-24 Liberator from the Republic of India. The collection continued to grow through 1975 and in 1976 the museum at last opened to the public. Today, the Pima Air and Space Museum is one of the largest non-government funded aircraft museums in the United States.

Ongoing Programs and Education: The museum offers docent-led tours of the indoor exhibit areas, and tram tours of the outdoor spaces. A guided bus tour takes visitors through the Aircraft boneyard. Docent-led school group tours are available, or educator resources may be downloaded for educators who wish to guide their own tours. Resources include suggested curricula, scavenger hunt games and lesson plans for the Great Paper Airplane Project. The Great Paper Airplane project is an annual event with a fly off in which paper airplanes compete for distance. In 2012, the museum flew the world’s largest paper airplane, Arturo's Desert Eagle. That plane, along with other subsequent winners are displayed in the Main Hangar exhibit. Other family events include Night Wings, a summer evening program offering up to 15 activity stations where children can learn about aviation through hands-on activities such as plane-spotting, kite-building and rocket launching. Night of Fright is an annual Halloween carnival for all ages that includes pony rides, trick or treating in the hangars and family friendly games. For children, 90-minute Soarin’ Saturdays programs offer hands-on workshops on building model aircraft, rockets and Lego robots. The program incorporates science, technology and math education into fun, interactive projects. Events for adults include the 2nd Saturdays Speaker Series. Speakers discuss a different air and space topic each month.

Back to: Things to do in Arizona, Things to Do in Tucson

Things to Do in Flagstaff: Sunset Crater Volcano National Monument

Things to Do in Flagstaff: Arizona Snowbowl