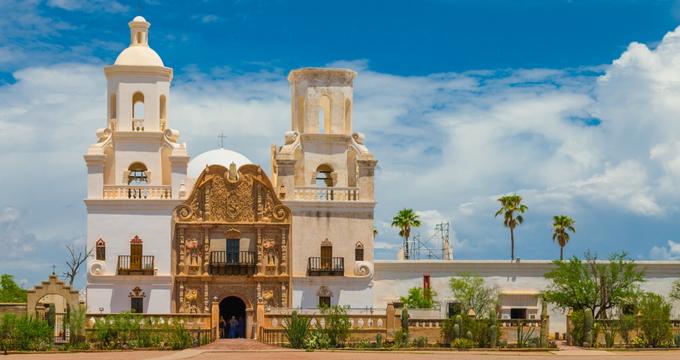 The Mission San Javier del Bac, known as White Dove of the Desert, is located just 9 miles south of downtown Tucson, Arizona on the San Xavier Indian Reservation. A National Historic Landmark, the Catholic mission was completed in 1797. The church is the oldest mission in Arizona, and the oldest European structure still intact. The Spanish colonial style building is considered by many to be the finest example of such architecture in the United States. Designed by the architect Ignacio Gaona, the low-fire clay and stone construction is unique in that the roof is constructed of brick vaults, as opposed to wooden crossbeams.

A wooden door of intricately carved mesquite opens into a remarkably ornate interior. Original paintings, frescoes, carvings and statuary remain. Recent renovations have restored the church nearly to its original splendor. Although little is known about the artwork, it is thought to have been commissioned by the Franciscans and crafted by artisans from Queretero in New Spain, now Mexico. Sculptures were crafted in Mexico then transported by donkey to the mission where they were decorated and painted once in place. Much of the artwork references Franciscan history and symbolism. A shell motif is repeated throughout, the shell a symbol of pilgrimage representing the Patron Saint of Spain. The traditional cathedral style floor plan symbolizes the cross. Smaller chapels exist at each end of the transept. A museum at the mission educates guests on the history of the site through artifacts and exhibits. Tours begin with a 20-minute video which tells the mission’s story.

History: The San Xavier Mission was founded in 1692 by the Jesuit missionary Father Eusebio Kino, at a time when Southern Arizona was still part of New Spain. The current building, however, was constructed by Franciscan Fathers Juan Bautista Llorenz and Juan Bautista Velderrain. The Franciscans were appointed by the Spanish king who had developed distrust for Jesuits in the Americas and banished them from service in the missions. Construction on the building began in 1783, with monies on loan from a Sonoran rancher. The Spanish Colonial style building was designed by architect Ignacio Gaona, and built with a large labor force of O'odham, the indigenous people of the area. The church was completed in 1797, long after the Jesuits had been expelled from New Spain. The church then operated as a Spanish Franciscan mission. In 1821 Mexican Independence rendered the Mission the property of Mexico. In 1837 the last Franciscan resident departed when Mexico expelled all Spanish-born priests.

The Mission became property of the United States, and the Diocese of Santa Fe in 1859, after the Gadsden Purchase of 1854. Regular services were held again in 1866 when an independent Tucson Diocese was formed and a priest was assigned to the church. In 1913, the Franciscans returned to the mission and today, the Franciscan Sisters of Christian Charity live onsite in the adjacent convent and operate a small school on the campus. In 1978, the non-profit Patronato San Xavier was formed to oversee the continued conservation and restoration of the church. Extensive conservation work began, removing over-painting and protecting the church from water damage. Exterior conservation work began in 1999 to remove over-plastering and expose the historical brick. Since 1978, over $11 million has been raised by the non-profit, but conservation work continues and much more remains to be done. The site is on the World Monuments Fund’s watch-list of at-risk cultural heritage sites. Close to 200,000 visit the mission annually, thousands of whom are pilgrims who arrive by foot or on horseback to pray to the reclining statue of St. Francis.

Ongoing Programs and Education: The church continues to hold daily Catholic services and special holy event services and is active in ministering to the local Tohono O'odham community. The San Xavier Festival is an annual Easter festival in which members of the Tohono O’odham and Yaqui tribes participate in a candle-lit parade. 45-minute docent-led tours are offered daily for visitors. Docents are community volunteers well versed in the history of the mission, its architecture, and its cultural surroundings. A gift shop on site sells commemorative items as well as authentic Tohono O'odham crafts, including baskets woven on the reservation where the church is located.

What’s Nearby: The historic communities of Martinez Hill and Los Reales are located adjacent to the Mission San Xavier. Both were established in the mid-1800’s.

Back to: Things to do in Arizona, Tucson things to do