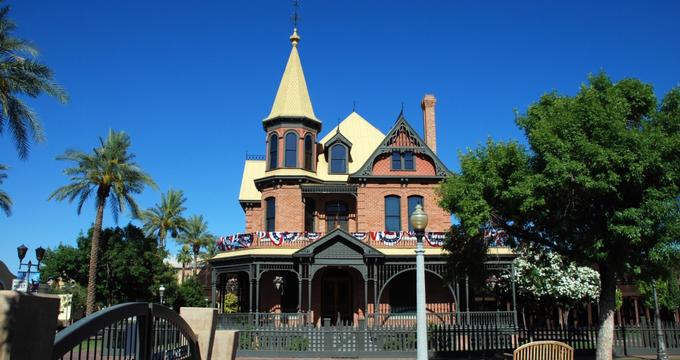 Located in Phoenix, Arizona, the Heritage and Science Park encompasses the oldest extant residential area of the city and is home to the Arizona Science Center museum as well as several notable restored historic buildings. The area now known as Heritage Square dates back to the late 19th century, shortly after the city's founding in 1867.

It is located within the city's historic townsite, a 320-acre area purchased in 1870 for development of the new downtown area. Today, the street grid of the townsite area roughly corresponds to the Downtown Core neighborhood, bordered by Van Buren Street, Jackson Street, Seventh Street, and Seventh Avenue. Heritage and Science Park encompasses four blocks of this historic grid, with its central hub at Block 14.

Block 14 was set for demolition in the early 1970s as part of the city's urban renewal campaign, but community efforts to save the area led to the city's purchase of the block and its historic homes. This community effort led to the full restoration of the Rosson House and the development of Heritage Square as a public park and historic district. Today, the district is jointly operated by the Heritage Square Foundation, a nonprofit organization, and the Phoenix Parks and Recreation Department.

In addition to its status as a historic district, the park takes its name from the inclusion of the Arizona Science Center. Originally known as the Arizona Museum of Science and Technology, the facility opened in 1984 as a small exhibition space located in the downtown Phoenix Hyatt hotel. The success of the exhibition led to the 1988 allotment of $33 million in funds to develop a permanent home for the museum. A 120,000-square-foot facility designed by Antoine Predock opened in the historic Heritage Square area in 1997, featuring over 350 permanent exhibits housed in 40,000 square feet of gallery space, a 289-seat IMAX theater, and the Dorrance Planetarium.

The flagship attraction of the park's historic district is the Rosson House, a restored Queen Anne Victorian house that serves as a living history museum. The house was built in 1895 as the residence of Dr. Roland Lee Rosson and was one of the most prominent residences in Phoenix at the time. It was purchased by the City of Phoenix in 1974 and restored to its Victorian splendor through the contributions of a number of local businesses and individuals. Visitors may view all of the house's living areas as part of docent-led tours, which elaborate on the home's former residents and its place in city history.

Several historic buildings in the district have been converted into modern restaurants and businesses, retaining the character and architecture of their historic use. The 1900 Silva House, an example of bungalow architecture incorporating neoclassical revival elements, is home to the Rose and Crown, a traditional English-style pub. The Bouvier-Teeter House, built in 1899, houses Nobuo, which doubles as a traditional Asian teahouse by day and an izakaya-style gastropub by night. Its former mule barn, the Teeter Carriage House, now contains the Royal Coffee Bar espresso bar. Two restaurants by chef Chris Bianco are part of the complex, including Pizzeria Bianco, built inside the 1929 Baird Machine Shop, and Bar Bianco, inside the neoclassical Thomas House, which was moved to the district to save it from demolition.

The Stevens-Haustgen House, built in 1921, is notable as an example of the turn-of-the-century California bungalow architectural style. Today, it houses the complex's Hands-on Heritage House educational center. Other historic structures house park facilities, such as the Forest Burgess Carriage House, which is home to the park's information center and gift shop, and The Duplex, built in 1923, which now serves as headquarters for the Heritage Square Foundation and the Parks and Recreation Department's park offices. A contemporary structure, the Lath House Pavilion, ties the complex's historic homes together as a space for special events and community rentals.

The foundation's conservation efforts include permanent collections documenting Arizona's late Territorial and early Statehood period, as well as an extensive collection of archival materials related to Block 14's restoration. While limited display space at Rosson House prevents a permanent museum exhibition, many of these materials can be seen in rotating temporary exhibits.

The park is home to major festivals and special events throughout the year, including the Motoring Thru Time and Heritage Festival, presented in February. Over 100 restored antique and classic vehicles are on display at the festival, which also features period-appropriate music performances, live crafting demonstrations, and hands-on historic activities. Guided school tours and educational events are also offered for area students, as well as a Traveling Trunk program, which brings the park's collections directly to classrooms and homeschool students.

More Things to Do in Phoenix