Things to Do in Arizona: Grand Canyon Railway 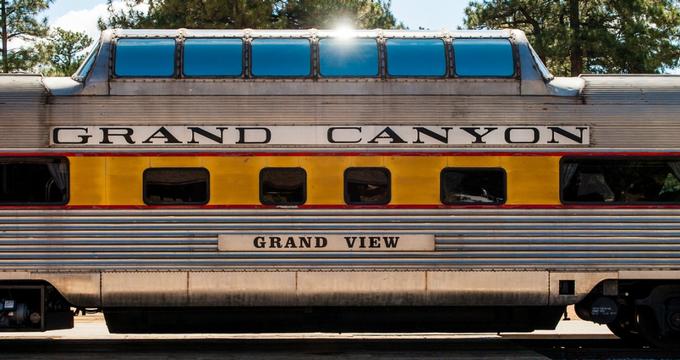 The Grand Canyon Railway operates a fleet of historic diesel trains from the town of Williams, just 40 miles from Flagstaff, Arizona. The two most-used engines in the fleet were built in 1977 by the General Motors Electro Motive Division. Additionally, the railway has several American Locomotive Company FP-4’s, built in 1959. Two have been fully restored and are in service, while one remains parked at the Grand Canyon depot for visitors to enjoy. A GP-7 engine remains at the Williams depot, and can be seen moving equipment or pulling the annual Pumpkin Patch Train around the yard.

Passenger trains in the fleet are fully restored historical cars. Vintage Harriman-style Pullman Cars were built in the 1920’s by the Pullman Palace Car Company. The cars had a long career in San Francisco before being retired to the Oakland rail yard in 1984 where years of salt-air and vandalism destroyed the cars. The Grand Canyon Railway fully restored and brought back to life 13 of the 81-foot long passenger trains, and updated each with electric heating and restrooms. 12 Budd coach class cars are in the collection. Each began life with the Boston & Maine Railway. The 85-foot long cars are climate controlled. Two Budd Café Cars are in the collection. The 29-seat parlor cars with 5-seat drawing rooms were originally built for the Pennsylvania Railroad in 1952. First class cars include the Buckey O’Neil, built in 1949 for the Southern Railway. The 85-foot long passenger car features a full bar. The Arizona and the Bright Angel were both built by the Budd Manufacturing Company in 1951 and used as Congressional and Senator trains on the Pennsylvania Railroad.

The Yavapai and the Anasazi were also built in the 1950’s by Budd Manufacturing. First class observation dome cars include the Coconino from the 1950’s, and the Kokopelli. The Grand View and the Desert View, which was built in 1948, both served on the legendary California Zephyr, one of America’s most popular trains of all time. Luxury dome cars the Fred Harvey and the Mary Colter were both built in 1955. Luxury parlor cars include the Chief (1947), the Santa Fe (1948) and the Max Biegert (1954). Trains depart daily on a 2-hour journey between two historic train depots. The first in Williams, and the second at the south rim of the Grand Canyon. The Williams Depot was built in 1908 as a stopover on the railway from Los Angeles to Chicago. On the National Register of Historic Places, it was the first poured concrete structure in Arizona. The Grand Canyon Depot was completed in 1910 and is within the Grand Canyon National Park. The National Historic Landmark is one of just three remaining log depots in the United States, and the only one still in service today.

History: Fred Harvey (1835-1901) of the Harvey Company was the first chain restaurateur in the United States. In 1878 he partnered with the railroads to offer food services and hotel facilities along the rail lines. The Harvey Company opened El Tovar, the Grand Canyon’s luxury hotel in 1905, and continues to operate it today. Now known as Xanterra Parks & Resorts, the Harvey Company continues to provide food, lodging and recreation to travelers and is the largest concessioner in the U.S. National Parks system. The Grand Canyon Railway has been in operation since 1901. Originally built to transfer ore from the mines north of Williams, the railway gained popularity with passengers when Teddy Roosevelt announced that “every American should see” the Grand Canyon. The railway was shut down in 1968 due to the rise of the automobile, but reopened over 20 years later in 1989 by Max and Thelma Biegert, two entrepreneurs with the desire to preserve the history of the rail line. Today, the railway claims responsibility for keeping 50,000 cars per year out of the Grand Canyon National Park, and has become a popular way for visitors to see the area.

Ongoing Programs and Education: Special events aboard the train include a holiday Polar Express Ride, in which elves provide snacks and entertainment, and a visit from Santa awaits guests upon arrival at the “North Pole.” The round-trip evening ride from Williams last approximately 90 minutes and is offered throughout November and December. Steam Saturdays offer special rides aboard steam-powered locomotives on select Saturdays throughout the year. The railway operates two steam locomotives, one a 1906 American Locomotive Company engine, and a 1923 Baldwin Locomotive Works engine.

Back to: Things to do in Arizona, Flagstaff things to do

12 Best Things to Do in Globe, Arizona