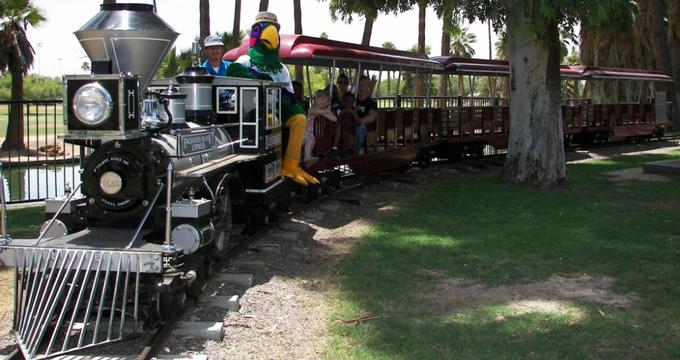 The Encanto region of Phoenix was organized as a public park facility in 1934 to curtail livestock grazing within the area. Land for the creation of the park was purchased from several area landowners, including J.W. Doris, who owned more than 100 acres within the region. Throughout the mid-20th century, the park was developed as a public recreation facility offering a variety of outdoor natural and sport activities, including archery, badminton, and tennis. Additional sports facilities, including soccer and handball fields, were added to the park in the 1970s and 1980s as part of a $1.3 million renovation, along with jogging trails and biking paths. The park’s Enchanted Island Amusement Park originally opened to the public in 1946 as the Kiddieland amusement park. In 1986, the park was shut down by the City of Phoenix for major renovations, and a number of original rides were sold, including its Allan Herschell carousel. In 1991, the park was reopened as Enchanted Island Amusement Park, featuring new rides and attractions for family visitors of all ages. Since its reopening, the park has been designated as a Phoenix Point of Pride by the City of Phoenix.

Park rides include the C.P. Huntington Train, a replica historic train modeled after the tank-back steam engine that was used in the early days of the first American transcontinental railroad. After being serviced for more than half a century, the original train was decommissioned in 1914, but before its demolition, it was purchased and displayed in San Francisco as a public exhibit for the Southern Pacific Railroad. The park’s replica railroad offers seven-minute tours of the park’s surroundings and is fully wheelchair-accessible.

Other attractions at the park include the Encanto Carousel, the oldest continuously-operating carousel in the state of Arizona, which has operated at the park since 1948. Midway rides include the Parachute Tower, which offers panoramic sky views, the Rock-N-Roll teacup ride, and the Red Baron flying airplane ride. A Dragon Wagon miniature roller coaster is offered for children, along with Kiddie Cars and a Mini Enterprise spaceship ride. Several miniature coin-operated children’s rides are also offered.

Children’s Bumper Boats are offered at the park between mid-October and mid-April, operated by battery on an 18-inch-deep water area. Between mid-April and mid-October, the Splash Zone water park, opened in 2009, offers children’s slides and flower shower, water mushroom, and dumping bucket attractions in a large pool area. The Castle Clash attraction lets teams of participants engage in water gun and cannon battles in a castle-themed battle environment. A 30-foot-tall Giant Climbing Wall is also offered, designed to resemble the terrain and rock formations of the Grand Canyon.

In addition to major rides and attractions, a variety of skill games are located throughout the park, offering play for different ticket rates. A snack bar serves standard American fare such as hot dogs, chicken strips, popcorn, snow cones, and ice cream sandwiches. A six-foot-deep lagoon for fishing is offered, along with pedal boat and canoe rentals on the park’s waterways. Pedal boats and canoes may be rented for half-hour and longer rates, and all riders under 12 must be accompanied by an adult rider. Visitors may also use the facilities and attractions within Encanto Park, including its swimming pool, its nature trail, its sports fields, and its two golf courses.

In addition to standard visitor admission, group rates are offered for small groups and organizations, including preschool and elementary school field trips. School fundraiser opportunities may be scheduled, with portions of ticket sale proceeds returned to school groups. Birthday party packages are offered for young visitors wishing to celebrate their birthdays at the park, with packages offering time at a private shaded picnic area, catered food, and all-day ride passes. The park’s facilities may also be rented for private special events for up to 10,000 guests, including corporate and community group picnics. Annual park special events include an Easter egg hunt, a Harvest Festival in November, and Cinco de Mayo and Domingo de Fiesta themed events.

Things to Do in in Golden, Colorado: Heritage Amusement Park