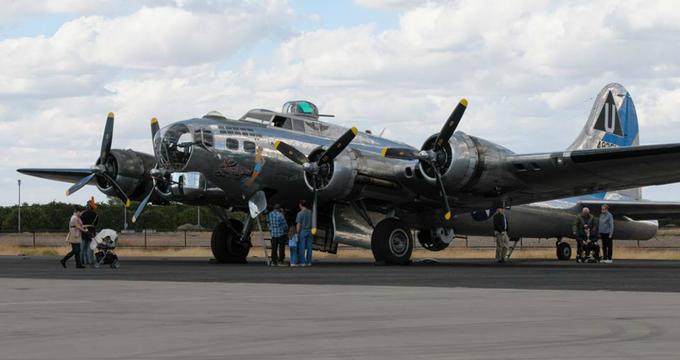 The Commemorative Air Force Museum is located at the municipal airport in Mesa, Arizona and displays historic aircraft and related artifacts. Exhibits tell personal stories of heroism and the history of flight from just prior to World War II through the present day. Displays include aircraft, artifacts, photographs and drawings, as well as old uniforms and flags. ‘Bomber Alley’ shows a collection of bomber airplanes from the 1940’s through today.

The exhibit includes 12 historic bomber jackets and a display of original artwork that graced the planes and jackets. A Tuskeegee Airmen exhibit educates guests on the history of African American pilots in the Air Force. The WASPs, Women in Air Force Service Pilots exhibit tells the history of women’s service in World War II. Other exhibits focus on Prisoner’s of War, the Doolittle Raiders, the Aztec Eagles, and the Flying Tigers. An Arizona ‘Walk of Fame’ honors Arizonan heroes. The museum displays close to 50 aircraft from World War I through Vietnam, including a B-17G bomber. The rare plane is one of just 10 in the world still capable of flying.

The bomber, named “Sentimental Journey” was the first to be repaired and restored by the museum. Other notable aircraft in the collection include a B-25J Mitchell, “Made in the Shade,” one of World War II’s most versatile aircraft. Made in the Shade flew 15 combat missions over Italy in 1944, mostly targeting railroad bridges. A PT-17 Stearman is an open-air biplane, a trainer plane in which many of the US Air Force pilots learned to fly between 1930 and 1940. A 1937 C-45 Expeditor was used for transport and photographic reconnaissance during World War II. Originally introduced as a civilian plane, visitors may recognize the C-45 from the closing scene in the movie, Casablanca. In addition to the aircraft and artifacts, the museum maintains an oral history of Veteran’s stories through its Living Legends program.

History: The museum’s origins go back to 1951 when a group of five friends pooled their money to purchase a surplus Curtiss P-40 Warhawk. Over the next 10 years, the group began to perform at air shows, and to search in earnest for the historic planes that were becoming more difficult to find. When they noticed the public was just as interested in the aircraft as they were, they formed a non-profit organization, the Commemorative Air Force, and invited other veterans to join. Since the formation of the organization in 1961, the Commemorative Air Force now has over 13,000 members and volunteer-led units all over the world who come together to save and preserve historic war craft.

The museum in Arizona is the home of just one of the CAF’s worldwide units, and began in 1977 when Mike Clark, a Phoenix resident, donated a rare Boeing B-17G to the fleet. The project of restoring the B-17G spurred the search for a facility in which to showcase, repair and preserve additional planes. That same year, the museum opened at Falcon Field, Mesa’s municipal airport.

Ongoing Programs and Education: ‘EduVentures’ take guests through the history of aircraft from World War II to the present day. Climb Aboard tours of several aircraft are available. Guests can get aboard a B-17 and B-25 bomber as well as a C-47 secret mission cargo plane. The Working Mechanics Hanger offers daily tours of the museum’s operational repair shop. Guests experience engines revving and may ask questions of the volunteer mechanics. Several of the planes have been fully restored and are able to take guests on short flights over Arizona. During the summer months, the fleet tours across the United States and Canada, offering flights and performing at air shows.

During the autumn and winter months, the fleet returns to the Arizona museum for flights. Guests can fly aboard eight of the planes in the museum’s collection, including the B-17 “Sentimental Journey,” the first aircraft to be donated and restored by the museum, the B-25J Bomber “Maid in the Shade” and the C-47 Cargo “Old Number 30.” The C-47 is the most decorated plane in the collection, having received the Presidential Unit Citation award for its involvement in combat during World War II. On Veteran’s Day each November the museum hosts an “Annual Gathering of Legends” event honoring Veterans from all wars, with a focus on World War II. Veterans are invited to share their stories with the museum, and record them for preservation in the Living Legends exhibit.

Back to: Things to do in Arizona, Mesa things to do

Things to Do in Phoenix, Arizona: Tovrea Castle