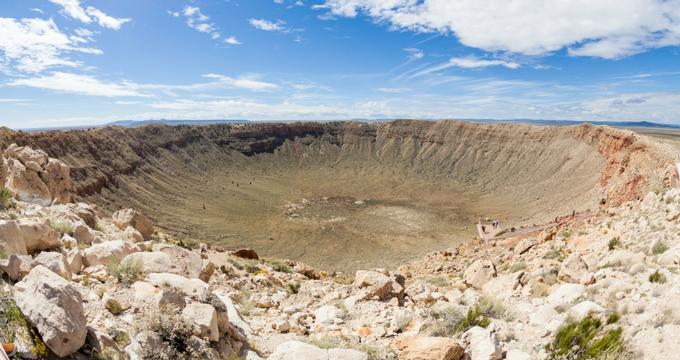 The Barringer Crater is a well-known Arizona landmark that attracts thousands of visitors to Flagstaff each year. The meteor impact site not only gives visitors a visceral appreciation for the force of nature that created it, it is also a great location to gaze at the night sky and discover the boundless cosmos from which our planet emerged. At the Meteor Crater Visitor Center, located on the outer rim of the crater, visitors can enjoy a variety of activities designed to educate and entertain.

The Barringer crater can trace its origins to a meteor that struck the Arizona desert approximately 50,000 years ago with a force equivalent to 2.5 million tons of TNT. While most of the meteor melted on impact, it also created a mist of fine metal that spread for a mile in each direction across the landscape. The crater that formed as the result of this explosion ended up measuring three quarters of a mile in width and 750 feet in depth. At the time of impact, the area where the crater is now found was far cooler and wetter. This previously forested area was home to giant ground sloths, mastodons, and mammoths, many of which perished during and after the impact. Initially, a lake formed on the bottom of the crater.

However, as temperatures increased, the lake bed dried up and came to resemble what we see today. The first geologist to study the crater, Grove Karl Gilbert, came to the erroneous conclusion that the crater was created due to volcanic activity. This was later disproved by Daniel Moreau Barringer, who, though lacking credentials in the field of geology, was convinced that the mixture of rock and iron found in material deposited at the crater’s edge meant that the crater had been created by a meteorite. These conclusions led Barringer to put together investment capital to fund drilling at the crater in order to extract the iron ore he believed was at the bottom of it. Though his theory of the origin of the crater was correct, further drilling revealed that the meteor had been pulverized on impact, leaving only water and quicksand below the crater’s surface. Today, the Barringer Crater reminds visitors about both the triumph of empiricism in science as well as the Earth’s long and storied natural history.

The Barringer Crater can be viewed from an air conditioned viewing area at the visitor center. Alternatively, visitors are encouraged to walk the crater rim and explore it individually. The springtime welcomes a variety of flora and avian species that are extremely photogenic against the crater backdrop, making a walk around the crater especially scenic. There are informative signs and observational telescopes that enrich the viewing experience, making it educational and immersive.

The discovery center located at the visitor center offers guests an opportunity to contextualize the Barringer Crater within a wider framework of meteor impact science. A 1,400-pound meteor fragment is one of the many highlights of this unique attraction. For those seeking a more hands-on experience, the discovery center also offers computer simulations as well as high tech graphics of asteroids, space, and meteorites. The 24 exhibits here chronicle the development of space exploration, from the tools used by early astronomers all the way to information about how the Apollo astronauts trained.

Just outside the discovery center, there is an 80-seat state of the art movie theatre where visitors can view a 10-minute feature film called IMPACT, Mystery of Meteor Crater. The film includes 3D models and animations of the impact that created the Barringer Crater, allowing viewers to visualize the tremendous collision.

Those visiting the Barringer Crater have a variety of accommodation choices, such as the Hilton Doubletree Hotel, La Quinta Inn and Suites as well as the Sleep Inn. While there is a Subway restaurant within the visitor center, there are many other dining choices abound in the city of Flagstaff. From local joints such as MartAnne’s and La Bella Via to chain restaurants like IHOP and the Pita Jungle, Flagstaff is sure to satisfy every palette. Beer enthusiasts are bound to enjoy Flagstaff’s Craft Beer and Wine bike tour.

More Things to Do in Flagstaff

Places to Visit in the Southwest: The Arizona Wave

Things to Do: The Arizona-Sonora Desert Museum