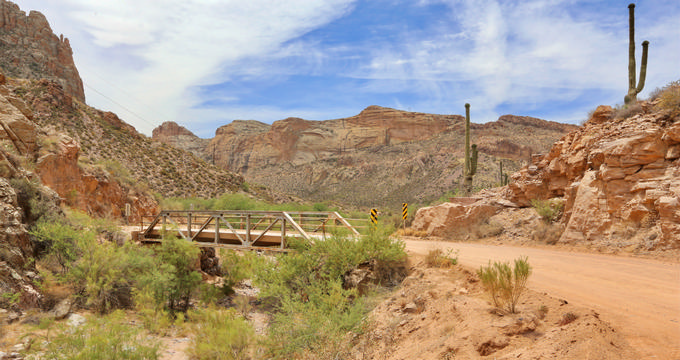 The Apache Trail is one of the most historic and beautiful sites in all of Arizona. It's a mostly unpaved trail, large parts of which are a simple dirt road, that used to be a stagecoach trail in times gone by, leading into the Superstition Mountains. The trail was named after the famous Apache group of Native Americans and runs for a little over 40 miles in its current state, running from Apache Junction outside of Phoenix to Theodore Roosevelt Lake and taking in all sorts of natural landmarks like Canyon Lake, Apache Lake, Tortilla Flat, and more.

There's a lot of history behind the Apache Trail, with the route actually being constructed to help deliver water to various settlements in the region through the construction of a dam. Apache Indians helped to build the trail, which provided an access route to the construction site of the Theodore Roosevelt Dam, helping materials and equipment be taken to the site with relative ease. Nowadays, the trail is regarded as one of the most beautiful scenic drives in all of America, taking in canyons, lakes, desert wildlife, and more. It's a relatively challenging drive, but conditions have improved in recent years and many people choose to set out along this scenic trail every year.

Getting to the Apache Trail

The Apache Trail is also technically classed as Arizona Route 88. It runs for less than 50 miles in total, with around half of it not being paved. The trail starts at Apache Junction, which is found east of Phoenix in the town of Mesa, Maricopa County. Depending on where you start out, the journey to the Apache Trail can take many different routes and last varying amounts of time, but the adventure itself will always begin at Apache Junction. If you're flying into Phoenix and using the Phoenix-Mesa Airport, Apache Junction is just short drive away.

Key Stops on the Apache Trail

There are plenty of exciting stops and landmarks to enjoy along the Apache Trail, both natural and manmade. One of the first stops you can make occurs shortly after Apache Junction, at Goldfield (4650 N Mammoth Mine Rd, Apache Junction, AZ 85119). Goldfield is an old ghost town from the 1890s. Various attractions can be enjoyed at this location, including an old Western saloon, gunfights, a museum, general store, and more.

The next big stop along the Apache Trail has got to be Canyon Lake. This is one of several reservoirs that were formed by the creation of the Theodore Roosevelt Dam on the Salt River. It's a large, beautiful lake surrounding by stunning scenery. Canyon Lake covers an area of 950 acres and is located around 15 miles along the Apache Trail. This is a highly popular recreational spot, with activities like hiking, camping, and fishing being very popular here. The likes of largemouth bass, catfish, and rainbow trout can be found swimming around beneath the lake's surface and it's a lovely spot to enjoy a picnic with friends and family.

Another must-see spot along the Apache Trail is Tortilla Flat. This is the smallest community in all of Arizona, with a population of just six people at the last count. It has its own post office, restaurant, and local store. The restaurant is a very popular stop-off point with people driving along the Apache Trail and is often the final point of many traveler's journeys, with most spending some time at Tortilla Flat before turning around and heading back towards Phoenix. If you do decide to go further, you can see additional landmarks and locations like Fish Creek Hill, Apache Lake, and of course the Roosevelt Dam itself.

The Apache Trail is a popular tourist hotspot throughout the year, but one of the best times to drive it is during the summer. There'll be less traffic at this time of year compared to summer, and the weather will still be warm enough for you to enjoy the various lakes and stops along the way. It's worth noting, as well, that the Apache Trail isn't an easy drive.

It gets progressively harder, especially after Tortilla Flat, so it's vital to ensure that your vehicle is in good working order and that your designated driver feels confident enough to tackle the trail. Avoid driving the trail on rainy days as the conditions can make it even more challenging, and be sure to bring along lots of water, some food, and phones in case anything happens, as well as enough gas to complete the whole trip.

18 Best Things to Do in Chandler, Arizona