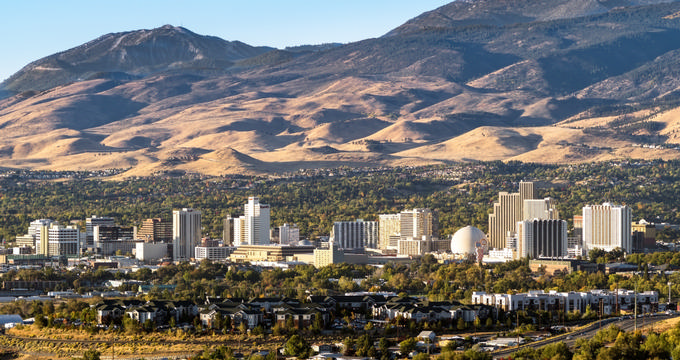 Sitting in the western part of Nevada, right by the state border that separates Nevada from California, is Reno. Reno is one of the biggest cities in Nevada and houses around a quarter of a million people, with approximately 470,000 in the surrounding Reno–Sparks metropolitan area. Known affectionately as 'The Biggest Little City in the World', Reno sits in a desert location but also boasts a lot of greenery and is only a short drive away from the highly popular recreational area of Lake Tahoe. Certain attractions may be temporarily closed or require advance reservations. Hours/availability may have changed. 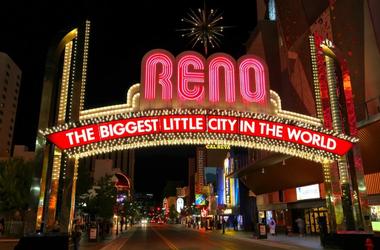 Aside from outdoor activities, the city is best known for its hotels and casinos. Like Las Vegas, Reno is a popular gambling and adult entertainment destination, known as the birthplace of Harrah's Entertainment, which became Caesars Entertainment Corporation and owns dozens of hotels and casinos round the United States. The city of Reno was founded back in 1868 and was a popular mining settlement to begin with, growing into a business and agricultural hub for Nevada in the years to follow. When gambling was legalized in Nevada in 1931, the city of Reno began to boom, with casinos opening up and becoming very popular.

Nowadays, Reno is seen as a smaller sibling to Las Vegas and is a highly popular touristic destination for people of all kinds. Gambling and live entertainment in the city, but Reno also appeals for many other reasons, being closely situated to the beautiful Lake Tahoe, as well as various ski resorts. Additional attractions like the National Automobile Museum and the Animal Ark offer even more reasons to visit The Biggest Little City in the World. 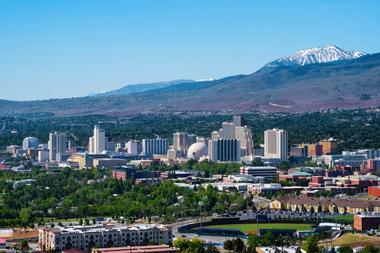 As well as things like population and surface area, one of the most interesting statistics of any city is its elevation, which is equivalent to its height above sea level. Reno has an elevation of 4,505.6 feet (1,373 m), which is quite high when compared to several major American cities like Washington D.C. or New York City, but relatively low when compared to places like Denver in Colorado. The mean elevation in the state of Nevada is 5,500 feet (1,520 m), which makes Nevada one of the highest states in North America.

When compared to the mean elevation of Nevada, we can see that Reno is quite close to the state average, with only 1,000 feet of difference. The high elevation of Nevada in general is caused by the various mountain ranges all around the state like the Sierra Nevada, which can be found just west of Reno and is partly situated in Nevada as well as California. Meanwhile, the highest man-made structure in the city of Reno is the Silver Legacy Resort & Casino, which stands at a height of 410 feet (120 m) and provides the best views of the city skyline and surrounding landscapes.

Other major Nevada cities include Las Vegas, which has an elevation of 2,001 feet (610 m) and Henderson, which sits at a height of 1,867 feet (538 m) above sea level, meaning that Reno is much higher than both of these locations. The highest point in all of the state of Nevada is Boundary Peak, one of the White Mountains in the west of Nevada, which has an elevation of 13,147 feet (4007 m), while the state's lowest point is part of the Colorado River which is just 481 feet (147 m) above sea level.

You are reading "Reno Elevation" Back to Top

3.Climate and Things to Do in Reno (Reno Elevation) 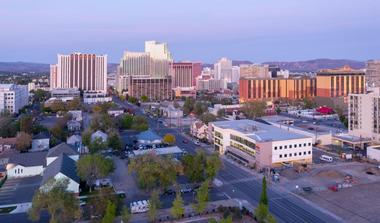 Reno has a steppe climate, also known as a semi-arid climate, meaning it has a relatively low amount of precipitation but still isn't quite dry enough to be classed as having a desert climate. Reno gets around 7.5 inches of rainfall per year, mostly due to the fact that the Sierra Nevada mountains nearby create a rain shadow for the city. Like Las Vegas and other Nevada locations, Reno can boast plenty of sunshine throughout the year, with 300 days on average. The city has mostly warm temperatures all year long, with hot summer months of June, July, August, and September, and a short winter.

In terms of things to do in Reno, the city has a lot of options to suit visitors and residents of all kinds. Reno is, of course, best known for its hotels and casinos. Like Vegas, the city has a lot of flashing lights and never seems to sleep, coming alive in the evenings with all sorts of entertainment and shows to go along with the various casino games like slot machines and blackjack tables. As well as these attractions, Reno is also close by to various areas of natural beauty like mountain ranges, Lake Tahoe, and multiple ski resorts.

You are reading "Reno Elevation" Back to Top

You are reading "Reno Elevation " Back to Top

25 Best Things to Do in Jackson Hole, Wyoming

25 of the Most Beautiful Arizona Mountains

25 of the Most Beautiful Mountains in Utah