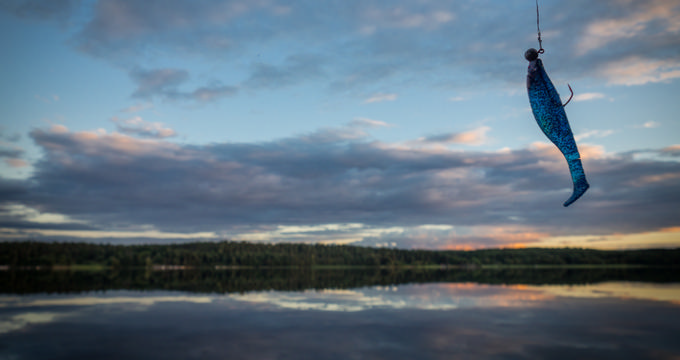 Fishing is one of America's oldest and most beloved activities. For some, it's a way of life. For others, it's a hobby or passion. For all of them, it's a relaxing, enjoyable, and often thrilling way to spend one's time. With two gigantic oceans on either side of the US and countless rivers, lakes, and other freshwater sources all over the nation, there's no shortage of super fishing spots in America, and if you happen to be living or visiting Nevada, Pyramid Lake is one of the top fishing locations of them all. CDC information for travelers. Hours/availability may have changed. 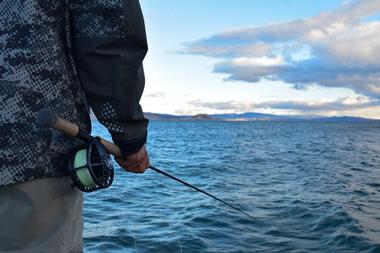 Covering an incredible 125,000 acres, Pyramid Lake is one of the biggest lakes in the state of Nevada and one of the larger lakes in the whole US. Surrounded by unique rock formations and stunning scenery, it's a beautiful place to visit and an even better place to fish. The lake has a fascinating history behind it too, having once been inhabited by the Paiute tribe, who relied on the various fish dwelling within Pyramid Lake to survive.

2.Fish to Catch in Pyramid Lake 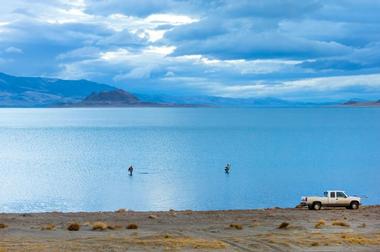 There are five main species of fish to be found and caught in Pyramid Lake, with the lake having attracted various celebrities, professional angels, and even President Herbert Hoover over the years, all in search of the 'big one'. Let’s take a closer look at the types of fish you can catch at Pyramid Lake:

The Cui-ui is a big sucker fish only found in Pyramid Lake. The males can weigh up 3.5 lbs and measure over 50cm in length, while the females are even larger, weighing up to 6 pounds and measuring over 60cm in length. These fish once filled Pyramid Lake but are now critically endangered, with their population numbers drastically declining in recent years. The native Paiute tribe used to eat a lot of these fish, which are quite easy to catch due to their large size and relatively weak swimming ability.

Named after Lake Tahoe, the Tahoe Sucker are quite physically similar to the Cui-ui, but there are a couple of physical differences you can look for to distinguish between the two species. The Tahoe Sucker, for instance, has quite a thick lower lip, while the Cui-ui's upper and lower lips are both very thin. These fish should be released back into the lake if caught as they are the main food source for the Lahontan Cutthroat Trout, which are the main trophy fish of Pyramid Lake. 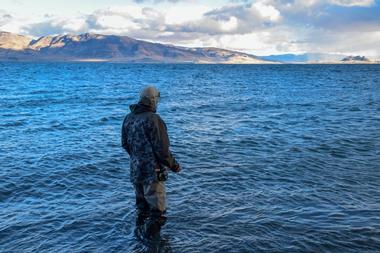 These small fish are one of the main food sources of the Lahontan Cutthroat Trout and tend to be found most often in spring-time. They can be caught but will need to be released due to their small size.

Having lived in the lake for more than 2 million years, this fish earned its name due to the red patches around its throat/gill area. As previously mentioned, these are the prime trophy fish in Pyramid Lake, with some reports stating that an 80 pounds Cutthroat Trout was once caught in the lake. The biggest confirmed catch, however, is 41 pounds. Sadly, like other species in the lake, the Lahontan Cutthroat Trout is also not far from 'Endangered' status. It can be thrilling to catch a trophy Cutthroat Trout, but the lake authorities encourage catch and release in the area to preserve the delicate ecosystem of Pyramid Lake.

As the name suggests this type of Perch only lives in California and was introduced to Pyramid Lake in the late 19th century. They hunt and eat other fish in the lake and the biggest Sacramento Perch ever caught on record was found in Pyramid Lake. It weighed in at 4 pounds and 9 ounces and was caught in 1971. 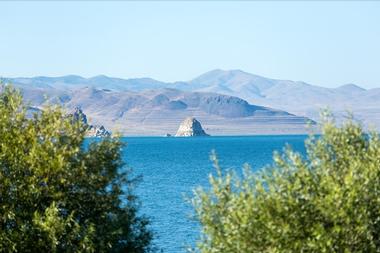 If you'd like to enjoy some fishing at Pyramid Lake, anyone is welcome to visit and test their skills, but there are some key rules to bear in mind:

- A State of Nevada Fishing License is not needed. Instead, only a Tribal Fishing or Boating Permit are required.

- Fishing can take place 1 hour before sunrise until 1 hour after the sun has set.

- Cutthroat Trout season is from October 1 through to June 30. Perch can be caught at any time of year, with a maximum haul of 10 per day.

- Small keepers need to measure between 17 and 20 inches, while large keepers must be at least 24 inches. All other sizes of fish need to be released.

- Barb less hooks must be used at all times, and no bait, worms, eggs, or other similar products are allowed to be used.