Portugal Things to Do: Albufeira 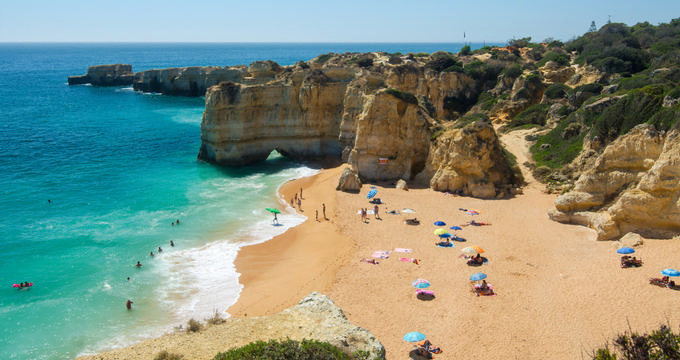 Albufeira is located in the Algarve, Portugal. It brings thousands of tourists every year with its blend of historical and modern sights. Albufeira has a rich history that dates back to the Roman era. In Roman times Albufeira was known as Baltum. In the eighth century, Moors took possession of the area and renamed the town Al-Buhera. Then in the thirteenth century the area was wrested from Moors by the “Knights of the Order of Santiago” and renamed Albufeira.

Like many small towns in the Algarve, Albufeira encompasses the remains of a castle dating to Roman times. The caste was destroyed in an earthquake in 1755. Though most of the castle was destroyed the Torre do Relogio still remains. The clock tower is usually lit up for celebratory and festive occasions.

Albufeira existed as a tiny fishing village until tourism came to the are in the 1960s. Major developments since the 1960s gave turned the small town into a significant holiday resort. Albufeira is quite possibly the most popular resort in the Algarve with more than one hundred hotels for visitors to choose from. Though major developments have modernized the town, part of Albufeira Old Town still exists and gives visitors a feel for what it must have been like before the 1960s. Streets that are narrow and cobbled wind their way up the hillsides lined with the single-story houses found in the old fishing village.

Albufeira is full of sights to see and activities to take part in for visitors whether they enjoy being outside or exploring museums,

Beaches: Albufeira contains several beaches for visitors to enjoy swimming and exploring. These beaches cover around thirty kilometers of the Algarve. Albufeira’s beaches can be golden sand stretching for miles that are backed by dunes to beautiful coves sheltered by colorful rocky outcrops and cliffs. The best know beach in Albufeira is Fisherman’s beach which is used as the backdrop for several open-air concerts. The beaches of Albufeira are marked with colored flags that tell visitors whether or not they are safe to swim in. Beach safety guidelines can be found on the website.

Zoomarine Algarve Marine Life Theme Park at Guia: This theme park is open 365 days a year and offers a great way to spend time with the family. There are sealion and dolphin shows, tropical birds shows, birds of prey demonstrations, a 4-D film on “Oceanus” aquarium, and a wildlife rehabilitation center for injured and ill marine wildlife. The theme park offers both education and fun. It also features ride attractions such as the pirate ship and water fume. Visitors will also find pools and concessions at the park.

Slide and Splash Water Park at Lagoa: Visitors to the water park will enjoy a break from the Algarve’s summer heat. The water park features several slides, river tube rides and pools.

Algarve Jeep Safaris with Arbez Zebra: Visitors can choose between the full day jeep safari or the Combi Safari: A jeep safari along with an adventure on a boat sailing the coast of the Algarve.

Algarve Pirate Ship Cruises: Visitors are given the chance to board the “Leaoxinho” pirate ship. The name means “little lion.” The ship sails along the breathtaking coastline of the Algarve. Partakers of the cruise will enjoy seeing amazing rock formations, beautiful sandy white beaches, and enjoy the amenities of the historic ship. Those interested in the cruise can choose between the Half Day Cruise with Caves which takes about three and half hours, the two-hour Captain Hook Cruise, the two and half hour Sunset Cruise, or the full day BBQ cruise.

Algarve Caves and: Dolphin Watching Cruise: Visitors can choose to take the original dolphin watching and cave cruise and hop aboard the “Insonia.” The cruise begins at Albufeira and sails along the coast to Carvoeiro.

Algarve Seafaris: These Seafaris offer tourists the opportunity to enjoy cruises, fishing trips, and boat trips, using the sea to show off the Algarve’s most spectacular sights. The cruises begin from the Albufeira Marina as well as the Vilamoura Marina and visit many of Europe’s biggest caves. These caves are set in magnificent cliffs and rock formations. Full and half day options are offered with an expert skipper. Partaking in these trips is the best way to enjoy the beauty of nature in the Algarve.

Diving: EasyDivers is an official PADI dive center covered by DAN insurance. They are based out of the Albufeira Marina and have access to wall diving, caves, wreck diving, and artificial reefs. The center also offers a series of scenic, shallow dive sites just off the Algarve’s shores.

Aqualand: This is another waterpark for visitors to enjoy.

Horse Riding: Visitors can enjoy thirty-minute rides using leading reins for inexperienced children or one and two-hour countryside rides for the more experienced at the Albufeira Riding Center.

Galleries and Museums: Albufeira offers several galleries and museums for visitors to explore.

Historical Sites: Though Albufeira suffered heavy damage during the earthquake of 1755 a few historical sites can be visited and explored.

- Arco da Travessa da Igreja Velha- This site was an Arab mosque originally and then converted to a Christian church later. All that remains is an arch.

- Torre do Relogio- This is the clock tower that was part of a castle tower originally.

- Castle Walls: Some remains of one of the castle walls can be explored and can be seen in rua Joaquim Pedro Samora.

- Torre da Medronheira- Located in Olhos de Agua, it was built during D. Joao III’s reign and used as a watch tower to look for raiding corsairs approaching.

- Paderne Castle- This castle was originally built in the twelfth century and can only be explored on the outside because of archaeological investigation being done inside.

- Ponte do Castelo- This is a bridge dating to the Roman era built over the Quarteira River in the valley that can be found under Paderne Castle.

Paderne Medieval Days: Hosted on December 30th through January 2nd this event includes a historic parade, medieval food court and market, as well as games and entertainment that originate during the medieval time period.

April 25th: This is Liberation Day for Portugal and it is celebrated with musical and sports entertainment throughout the day and a fireworks celebration at night.

July and August: Sports events on Albufeira’s beaches are hosted during these months

July: Festa do Frango no Churrasco is hosted for three days. It is three days dedicated to barbecuing chicken. Feira de Artesanato de Albufeira takes place as well. It is a festival dedicated to traditional crafts in the area and encompasses nine days.

August: This month includes several festivals which can be found on the website.

September: Several other festivals are hosted during this month.

Albufeira offers visitors several options for dining out while touring the Algarve. There are restaurants, cafes, and bars all over the town. The local cuisine is based on Albufeira’s ability to obtain fresh fish, and seafood. Much of the alcohol sold in the area is reasonably priced. Beer drinkers will enjoy the three national brands: Sagres, Super Bock, and Cristel. The restaurants not only specialize in local cuisine but include fair from around the world such as French, Italian, German, Indian, and Chinese food. Traditional British foods are served in many of the cafés.

Albufeira offers a variety of shops and stores for visitors to explore. A great number of shops in Albufeira Old Town and on “The Strip” cater to holiday merchandise such as casual and beach wear, sunglasses, gifts and accessories. During the summer, visitors will enjoy exploring the street stalls. Visitors will also find typical shops that are to be expected in town such as the post office, pharmacies, and wine shops. There are several supermarkets located in Albufeira for grocery shopping. The Algarve Shopping Mall contains a large supermarket, cinemas, food courts, as well as other shops that include children’s shops that specialize in toys and clothes, as well as other typical shops that might be found in the mall.

More Portugal things to do

Things to Do in Alaska: Lake Clark National Park and Preserve

Things to Do in Alaska: Kobuk Valley National Park