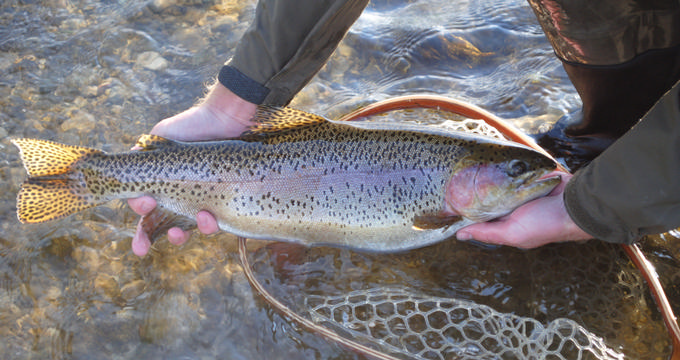 Yellowstone National Park was the first national park in the entire US and is widely considered to be the most well-known, boasting incredible wildlife and stunning scenery. Spread across the states of Wyoming, Idaho, and Montana, Yellowstone has a fascinating history, having been home to Native Americans for many millennia, and the park itself covers an area of almost 3,500 square miles. A popular spot for all sorts of outdoor activities like camping and hiking, Yellowstone is also a super location for fishing.

The park boasts several rivers and lakes, including the enormous Yellowstone Lake, as well as Yellowstone River and Snake River. There are 13 native species of fish in the waters of Yellowstone National Park and half a dozen additional species that have been introduced over the years. Some of the most highly prized species include Yellowstone cutthroat trout, mountain sucker, longnose sucker, brook trout, lake trout, and rainbow trout.

Types of Fish to Find at Yellowstone

With almost twenty different species to catch in total, Yellowstone offers a lot of fishing variety, but certain species are prized more highly than others. Here are some of the most desirable fish for anglers at Yellowstone:

Lake trout - These fish are the biggest you can find in all of Yellowstone, with some regularly growing to 30+ pounds and the park's record catch weighing in at 42 pounds. They were one of the first non-native species to be added to the park and can be found often in the Lewis River, Heart Lake, and Lewis Lake. All Lake Trout must be killed as these fish are proving too competitive and could wipe out some of the native species.

Rainbow trout - One of the most popular fish to catch all around America, Rainbow trout were introduced to Yellowstone in the late 19th century and have thrived around the park. They can be found through the Yellowstone River and in the aptly-named Trout Lake.

There are lots of different water sources all around Yellowstone National Park, with each one holding its own array of fish. Through decades of experience, fishermen have identified the best locations, and here are the details on some of them:

It doesn't take a genius to work out what this lake is all about. The perfectly-named Trout Lake has always been a hotspot with anglers at Yellowstone. It's a short walk from the Northeast Entrance Road and has provided some huge Yellowstone cutthroat trout and rainbow trout over the years, as well as many rainbow/cutthroat hybrids. Fishing is good from the shoreline but tubes can also be used to access the deeper waters, with a boating permit.

Divided into the Upper and a Lower section, this river is one of the biggest attractions of Yellowstone National Park. When it comes to angling, the lower section of the river is easier to access and provides the same sort of returns as the upper section, without all the hassle needed to actually get up there. Since the upper section is so hard to get to, it's one of the purest, most natural spots in the park to fish. Both sections of the river are great for catching rainbow and cutthroat trout.

Named after its resemblance to a heart shape, Heart Lake is possibly the best spot for lake trout fishing in the whole of Yellowstone as this is where the park's record catch was found. A 42 pound lake trout was caught in these waters, with mountain whitefish and cutthroat trout also being found in the lake. Like many other areas in the park, only fly fishing is allowed here.

The biggest lake in the entire park, Yellowstone Lake has a surface area of 136 square miles and a shoreline over 100 miles. The depth of the lake can go all the way down to 390 feet and it's the biggest lake on the continent. It used to be a great spot for cutthroats but they're slowly getting eliminated by lake trout.

Point Loma Fishing - Things to Do