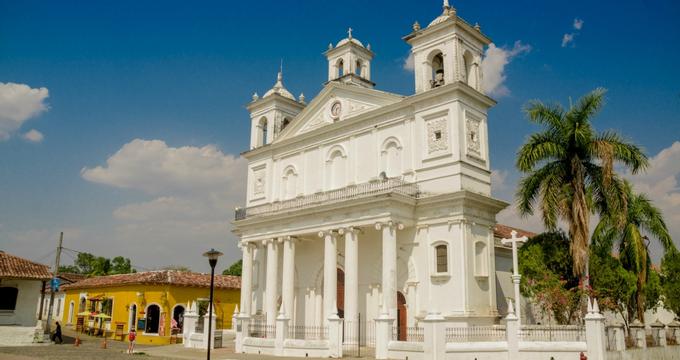 El Salvador is usually overshadowed by its more famous neighbors, Costa Rica and Panama, but what visitors don't realize is that this small country in Central America has a large collection of national parks and historical sites. Outdoorsy nature lovers will enjoy hiking to the highest point in El Salvador up the Cerro El Pital or going on a refreshing dip in the hot springs near the Coatepeque Caldera. There are some beautiful cathedrals that architecture aficionados will adore, such as the Cathedral of Santa Ana or the San Salvador Cathedral. Other sites and attractions that visitors shouldn't miss are the Monumento al Divino Salvador del Mundo, the National Palace, and the Mayan archaeological ruins of Tazumal. CDC information for travelers. Hours/availability may have changed. 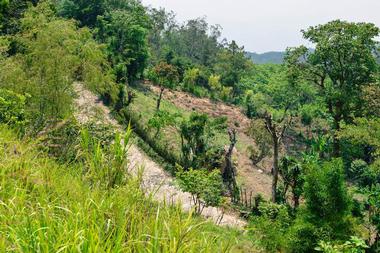 Found on the border of El Salvador and Honduras, Cerro El Pital is a mountain in the Sierra Madre de Chiapas mountain range. The mountain towers nearly 9,000 feet above sea level and is both the highest point and the coldest place in El Salvador. Considered one of the most popular tourist sites in the country, visitors can explore great biodiversity in the cloud forest. There are many species of flora and fauna that people will come across, including quetzals and other endangered species. In addition to the lovely hike and beautiful scenery, visitors can also enjoy a delicious meal at a local restaurant in the foothills. 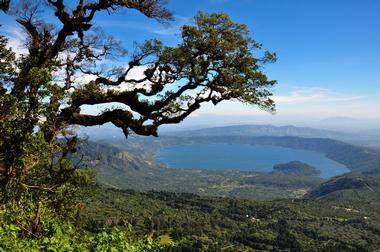 Visitors will be able to see so much during a visit to the Coatepeque Caldera, a large crater lake surrounded by wooded hills. Across the stunning blue lake lies Teopan Island, which was once a sacred site for the ancient Maya. Other attractions visitors will see include the Izalco Volcano and the towering Santa Ana Volcano. Activities at the Coatepeque Caldera include hiking, exploring the sites, and taking a refreshing dip in the cool lake or the hot springs near the lake margins. Visitors can end their visit with a fresh and delicious dinner at one of the restaurants along the shore while enjoying the beautiful scenery that surrounds them. 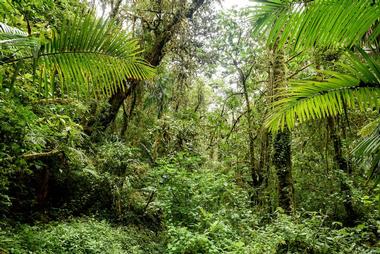 Adventurous visitors in El Salvador will love a day trip to El Boqueron National Park, which is only half an hour away from the Salvadoran capital. The park is at the top of the San Salvador Volcano, which lets visitors get up close and personal with a crater that is over 1,800 feet deep and over 3 miles wide. Additionally, there is a smaller crater within the larger one called Boqueroncito, which visitors can also explore. It's quite a hike to get up there, but it is well worth the view as well as the flora and fauna that visitors will come across. Beginner hikers can explore one of the shorter and less difficult trails since there are many within the national park. 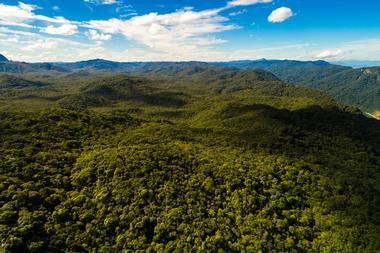 Established in 1989, El Imposible National Park is a tropical forest and national park in the heart of the Apaneca-Ilamatepec mountain range in El Salvador. Literally translating to "the Impossible National Park," the 14.7-square-mile park was once a perilous trek for farmers transporting coffee through the park. There are many tour companies that visitors can hire to explore the park as well as its many rivers and the mangrove forest along the coast. Some of the flora and fauna visitors will come across are pumas, wild boars, black-crested eagles, and a variety of plants. 
Found on the borders of La Paz and San Salvador, Lake Ilopango fills the caldera of a volcano that last erupted in 1879. It is the second largest lake in the country and visitors can take a boat ride to the island in the middle, Ilopango Volcano. The popular tourist area is filled with restaurants and souvenir shops for visitors to dine in and explore. Locals and tour guides will love to share the theories that the eruption that formed the lake was the source of the extreme weather events of 535-536 AD. Visitors can schedule their visit around the annual air show held at the Ilopango International Airport, which hosts pilots from all over the world. 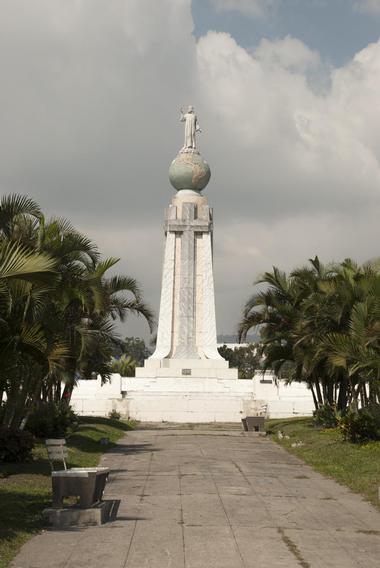 
Visitors will come across the Monumento al Divino Salvador del Mundo in the Plaza El Salvador del Mundo, or The Savior of the World Plaza. The monument comprises Jesus standing on top of the world in the form of a globe, and the entire structure sits on a concrete base pedestal. Many consider the statue, which has since been designated a national landmark, to represent Salvadorans throughout the world. The towering structure was built by architect Jose Maria in 1941 and has become the location of many of San Salvador's festivities over the years; visitors can spend hours visiting the statue and exploring the plaza during their visit to El Salvador. 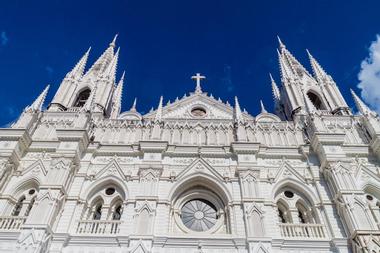 The Cathedral of Santa Ana, or Our Lady Saint Anne, is a neo-Gothic cathedral in the heart of El Salvador. Its architectural style is rather different from other cathedrals visitors will see in the country, which were mostly built in the Spanish colonial style. The cathedral was completed in 2016 and is often visited by both locals and tourists. There is a marble altar to the Virgin Mary in the cathedral that visitors should see, as well as six stunning bell towers. Another aspect of the of the cathedral that shouldn't be missed are the eight bronze statues of dogs, which are believed to guard the cathedral.

The original structure of the National Palace was constructed around 1870 but was lost to a fire in 1889. The building that people see today was constructed in 1911 under the direction of master builder Pascasio Gonzalez Erazo. The beautiful palace, which has been declared a national monument, was built with materials imported from all over the world, including Italy, Germany, and Belgium. There are over a hundred rooms in the building for visitors to explore, with the four main rooms being the Red Room, the Yellow Room, the Pink Room, and the Blue Room, which was the meeting place of the Legislature of El Salvador from 1906. 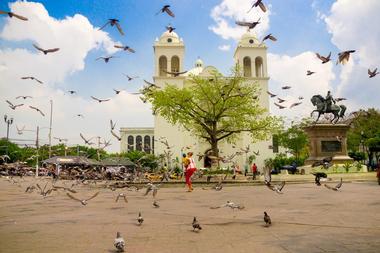 The Metropolitan Cathedral of the Holy Savior, more popularly known as the San Salvador Cathedral, is the seat of the archbishop and is the principal church of the Roman Catholic Archdiocese of San Salvador. The cathedral has a colorful and festive façade, which surrounds a shrine to Jesus. Another aspect of the cathedral that visitors shouldn't miss includes the image of Jesus on the main altar, which was donated in 1546 by the Holy Roman Emperor Charles V. The main altar also has paintings by Andres Garcia Ibanez that depict various events from the life of Christ. 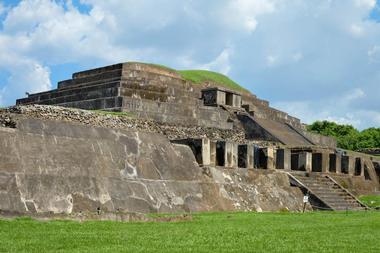 Tazumal is one aspect of the much larger ancient Mesoamerican city of Chalchuapa. The pre- Columbian Maya archaeological site was excavated and restored by archaeologist Stanley Boggs in the 1940s and 1950s. Visitors can now explore the ruins, which have various structures such as the main pyramid, B1-1, and the Great Platform by Boggs, which is almost 240 feet by 285 feet in size. Various artifacts have been uncovered from Tazumal, such as ceramic vessels, a polychrome bowl, and various pieces of jade, animals bone, and seashells; visitors can see these and much more at the Tazumal site museum.